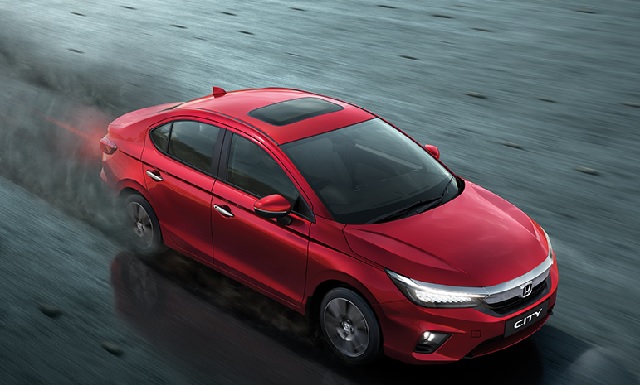 The Honda City Hybrid will be offered with 2 trim levels namely V and ZX. The sedan will also be powered by a 0.734kWh lithium-ion battery, which will power the car from a petrol engine, which will improve the car’s mileage. This luxury sedan will be offered with Honda’s i-MMD hybrid technology. The petrol engine of this Honda City Hybrid car will generate 98bhp power and 127Nm torque. At the same time, it’s the electric motor will act as an Integrated Starter Generator (ISG) and it will be able to generate power of 109bhp and torque of 253Nm.

The Honda City Hybrid gets full LED headlamps with nine array inline shells with integrated LED DRLs and L-shaped turn indicators. Additionally, the bumper gets a new claw-type fog lamp garnish. The Honda City hybrid car is powered by a set of 16-inch dual-tone black painted diamond-cut alloy wheels. Apart from this, it also gets Z-shaped 3D wraparound LED taillamps at the rear, a new trunk lip spoiler and a new rear bumper diffuser with a carbon finish.

The hybrid version gets two-tone ivory and black interior theme along with contemporary seats wrapped in premium leather upholstery, an electric parking brake with auto brake hold and a new centre console with a utility tray. An 8-speaker system has been given in the cabin of the car. It gets an 8.0-inch infotainment system with smartphone connectivity, the latest Honda Connect app with Amazon Echo, a smart key system, and Google Assistant, which supports smartwatches with voice command functions on select smartwatch models. The driver display is fully digital and also has an auto-lock function and is highlighted by a seven-inch full HD colour TFT meter that displays information about power flow and Honda Sensing technology.

These cars will compete

The Honda City Hybrid will compete with the Maruti Suzuki Ciaz, Hyundai Verna and the Skoda Slavia. However, the City Hybrid has no direct rival as it is the first car in the segment to be equipped with this technology.

Hyundai Creta Facelift 2023 Model: Know what will be the new changes

Booking for the new Audi A8 L luxury sedan started in India, know the...