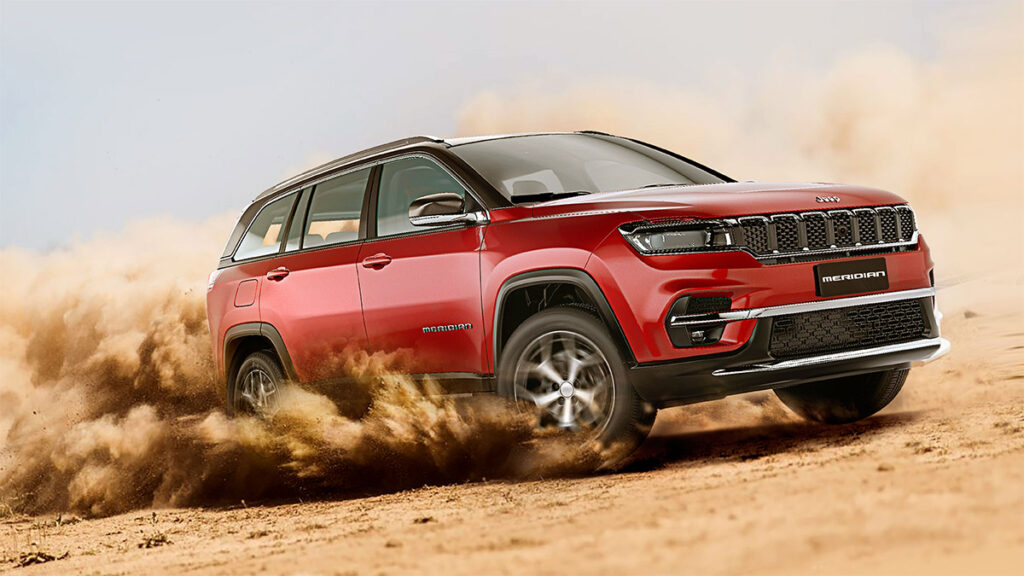 Jeep company has removed the curtain from its new Jeep Meridian and the company is going to launch it in June 2022. The company had already shared some pictures of its Compass based SUV and showed the first look of the SUV’s styling and cabin. Now the company has given information about its equipment, gearbox, engine, seating and drive configuration, which will be given in this vehicle. The Jeep Meridian is an India-specific variant of the seven-seater Jeep Compass called the Commander sold in Latin American markets. The Jeep Meridian will be manufactured at the Ranjangaon facility. Which will serve as the production centre for the right-hand-drive version of the car. While the bookings for this SUV have not started officially yet, Meridian will start arriving at dealerships in mid-May and deliveries will start from June.

The Jeep Meridian SUV is expected to sport the automaker’s signature design. The SUV can be styled similar to the Jeep Compass. It will come as a three-row SUV and will retain many of the stylings of the Compass including the iconic Jeep grille up front and muscular line. You also get a two-tone floating roof treatment with a full-width chrome strip at the front. And although the Meridian looks similar to the facelifted Compass, every panel and component on the Meridian is new, except for the windshield and front seat frame, says Jeep’s chief design officer Ralph Giles.

The Meridian gets bi-LED projector headlamps upfront and the stance of the SUV gets 18-inch diamond-cut alloy wheels painted in gloss black. The Meridian is also significantly larger than the Compass, with the overall length increased from 364 mm to 4769 mm and the wheelbase also lengthened from 158 mm to 2794 mm, which should address one of the Compass’s shortcomings – ie the rear seat. place, or lack thereof. Move up to the rear and the design has hints of Grand Cherokee and Wagoneer, and the Meridian gets slim LED tail lamps, with a chrome garnish with the Jeep logo between the tail lamps. Meridian promises to be a gorgeous sight when it hits our Indian roads.

The Jeep Meridian is also expected to be powered by a 2.0-litre diesel engine and a 1.5-litre petrol engine, as seen on the Jeep Compass. Reports suggest that these engine options will get a power tune to take on the extra load of the SUV. Transmissions on offer will include a 9-speed automatic and a 6-speed manual gearbox transmission. A 7-speed DCT automatic will also be offered as an option.

A jeep without a 4×4 system is not called a jeep. As part of the announcement, the Jeep crossed India along the 77-meridian and is shown going through some particularly rough terrain. The new Jeep Meridian SUV will feature a 4×4 system in the higher variants, with select traction modes to handle the off-road terrain.

Jeep offers a design that is different enough to make it stand out. Jeep has changed the exterior of the Meridian to give it a different look from the Compass. Although the front fascia is similar to that of the Compass, with its distinctive signature Jeep grille, it has reworked the rear of the Meridian. It now gets sleek tail lamps, and sports chrome bits and lines that run and connect the LED lights on both the front and rear. The back profile is now more simple to accommodate the last 2 passengers. The rear look is inspired by the Jeep Wagoneer and Grand Cherokee.

Coming to the Jeep Meridian interior, its dashboard layout is similar to that of the Compass, though it drops the all-black look of the smaller model for the brown colour scheme. In addition, Meridian’s leather upholstery uniquely features a perforated and quilted pattern.

The estimated price of Jeep Meridian should be around Rs 30-45 lakhs.

32 Lakh – 42 Lakh (For Petrol)* Jeep Meridian’s major rivals will also include the Tata Safari and Hyundai Alcazar 7-seater SUVs, which will lack the same premium quality but cost less than American SUVs. Toyota Innova Crysta and Kia Carnival are also premium rivals in the MUV segment that can challenge the Meridian.