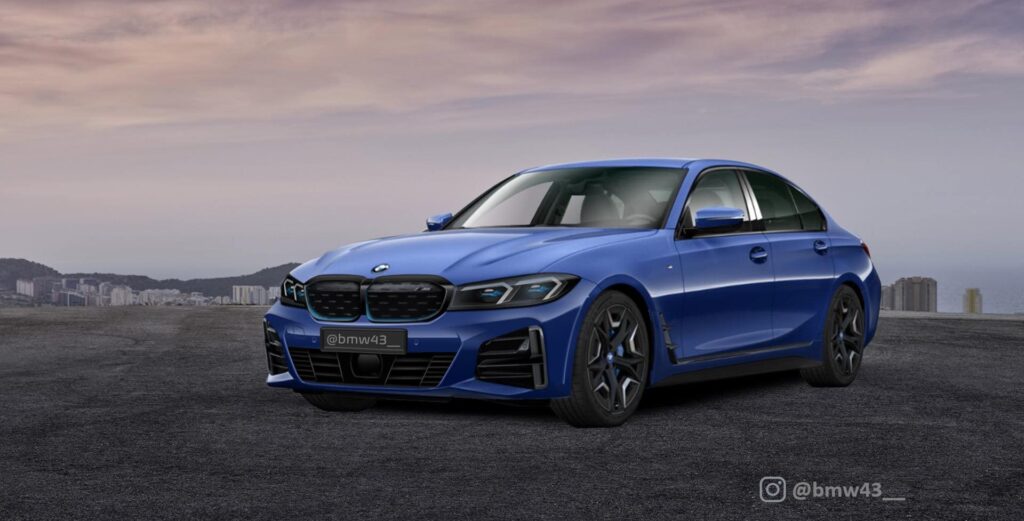 Images of the facelifted BMW 3 Series have been leaked online, revealing some design updates for BMW’s popular sedan. While many of BMW’s cars had an obnoxiously large grille and overly flamboyant design – never a hallmark of BMW’s design – the G20 BMW 3 Series facelift remained a simple, sporty and handsome looking car. The winning streak continues for the 2022 BMW 3 Series. The BMW 3 Series is a relatively small and elegant luxury sedan compared to other BMW models. BMW 3 Series can knock in the international market anytime this year.

Depending on the market, the facelifted sedan is available with both petrol and diesel engines with 48-V mild-hybrid technology. It also gets four plug-in hybrid options and an ‘M’ variant. The current India-spec 3 Series gets three powertrain options: a 2-litre four-cylinder turbo-petrol engine (258PS/400Nm), a 2-litre four-cylinder turbo-diesel engine (190PS/400Nm), and a 3 – litre straight-six turbo-petrol engine (387PS/500Nm). All of them use an 8-speed automatic transmission.

Talking about the design of the 2022 BMW 3 Series, the headlights of the 3 Series look like those of the 4 Series. The BMW 3 Series headlights come with full LEDs as standard and the brand’s latest anti-dazzle technology. The grille on the BMW 3 is also slightly different, now a bit sharper and packing the M-style double grille slats. Underneath the new grille and headlights, the old, smaller one has been replaced with larger air intakes. This is the BMW 3’s biggest area of ​​improvement. The larger air intakes of the M Sport package have also been painted the same body colour as the car, as compared to the black paint colour earlier. Due to pedestrian regulations, the nose is also more angled, and shark-like, while the gap between the kidney and the bumper is extremely thin. According to BMW, the car is now 4mm longer, but that’s mainly thanks to the above changes to the front fascia. The rear bumper of the BMW 3 Series is different and there is a redesigned diffuser in the middle.

The interior of the BMW 3 Series facelift is similar to that of the BMW i4, with a new iDrive 8 integration, dual infotainment screen setup and BMW’s latest digital gauges. Unlike the i4, however, the new 3 Series ditches the old robot-leg shift lever for the iX’s toggle switch. A subtle update to the interior is what makes a significant difference and that is the dash trim piece which now looks taller, more sculpted and more premium than the simpler trim of the Pre-LCI.

Post-launch, the facelifted 3 Series will continue to take on the Audi A4, Volvo S60, Jaguar XE and the recently launched Mercedes-Benz C-Class in India.

Prices for the facelifted 3 Series may start at Rs 48 lakh (ex-showroom). The facelifted 3 series is expected to go on sale internationally later this year and may launch in India. BMW sells the 3 Series in the Indian market in both standard and long-wheelbase (gran limousine) versions and is likely to continue with the facelifted model.

Share. Facebook Twitter Pinterest LinkedIn WhatsApp Reddit Email
Previous ArticleLexus will launch its super-luxury car in India, and will compete with Mercedes, BMW and Audi
Next Article 2022 Mahindra Scorpio-N SUV will be launched on June 27, will get great features with great looks