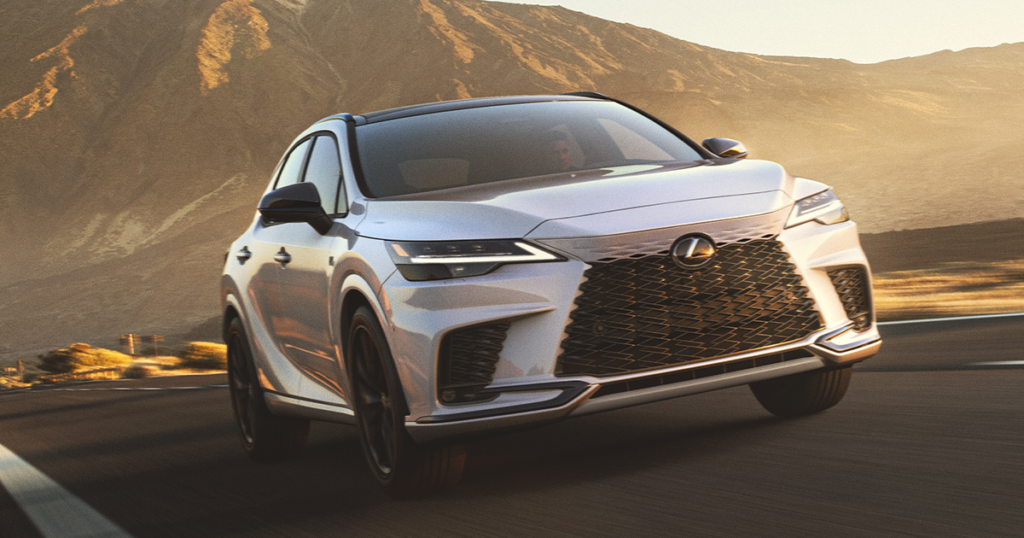 Lexus is all set to introduce its new RX SUV in India. The company has recently released the teaser of this upcoming SUV. In which some designs of Lexus RX can be seen. It is said that it will share its design and features with the Lexus NX. The 2023 Lexus RX is likely to get a new hybrid powertrain with new features.

The luxury crossover now gets a choice of 2.5-litre naturally aspirated and 2.4-litre turbocharged petrol units, both of which are available with self-charging hybrid technology. The 450h+ trim gets a plug-in hybrid powertrain, while the start-of-the-line RX350 trim gets the sole turbo-petrol unit.

As per the teaser image released by Lexus, the new Lexus RX features a refreshed front section with the Lexus spindle now converted into a honeycomb mesh that runs from the bottom of the Lexus logo at the centre to the underside of the bumper. The Lexus RX gets sleek headlamps and LED DRLs with smoked elements at the bottom. The Lexus RX elevates its stance with a massive set of 19-inch alloy wheels, which are finished with body-coloured over-fenders in a dark brown machined finish. The Lexus RX also gets 21-inch alloy wheels. The rear door of the Lexus RX is reminiscent of the 3D effect. The black panel on the C-Pillar looks quite attractive. At the rear, the 2023 Lexus RX now looks wider, with the signature L-shaped light bar lamps placed around the sides of the body. Lexus is offering the 2023 RX in 10 exterior paint schemes – Ultra White, Nori Green Pearl, Eminent White Pearl, Iridium, Nebula Gray Pearl, Caviar, Matador Red Mica, Copper Crest, Nightfall Mica and Grecian Water.

Lexus-provided photos of the interior reveal a cabin that has been decorated in all the right places. The steering wheel on the Lexus RX 2023 looks new, with the biggest change in the Lexus RX being the infotainment display with multiple USB-C ports in place of the USB-A standard. The infotainment screen also grew to a more standard aspect ratio and 14-inch size. A prime example is a door opening with the touch of an e-latch system. The cabin comes in several options – Birch, Palomino, Black, Peppercorn, Macadamia and Rioja Red. The roominess element is emphasized by the sunroof while the ambient lighting enhances the overall feel. Even the side panels will receive a refreshment for this model and will feature interesting textures and surfaces that match well with the design motif of the Lexus brand. Every time the driver starts the car, we believe an all-digital gauge cluster will welcome them, at least for the ‘F’ trims, while Lexus may keep the analogue speedometer and tachometer for the standard variants in the lineup.

It will compete with the Mercedes GLE, BMW X5, Audi Q7 and the Land Rover Discovery.

It is expected to be priced north of Rs 1.10 Cr (ex-showroom). Lexus RX expected to go on sale internationally in 2023.