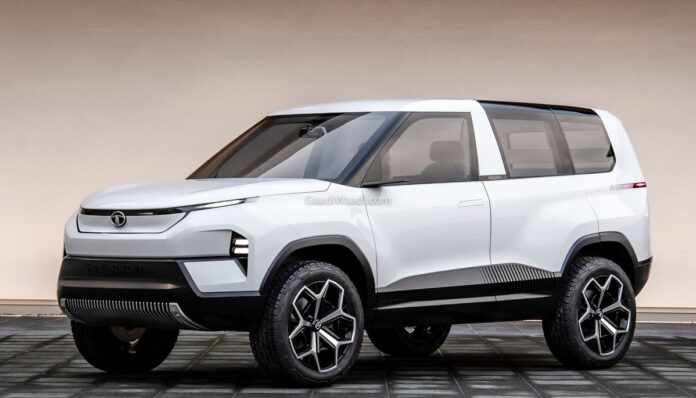 Automakers from all over the world have participated in Asia’s biggest motor show. The country’s largest vehicle manufacturer Tata Motors participated in this motor show and has presented its old legend in a completely new avatar. The Tata Sierra, which redefined the SUV on the Indian road in the nineties, has been introduced in an electric avatar for the first time. When the curtain was removed from this SUV, people were stunned to see its great look and design.

The Tata Sierra Eve comes with LED headlamps and tail lamps and Tata also offers a black cladding under the edge and a dual-tone alloy wheel. The car will provide you with electric sliding doors and swivel seats. Tata sports a three-door design and the headlight setup of the car is similar to that of the Tata Harrier. Tata Sierra is hoping to give you a 360 degree camera. These cameras will replace the rear view mirror. The car gives you a digital step back and sleek interior look. And the best part about the car is that they are offering a beacon light inside the car which will enhance the lounge like experience of the rear compartment.

Apart from this, the wood work given in the back part is also quite spectacular. The roof is decorated with a clear sheen that covers the side windows. Apart from this, LED headlight and tail light have been used in it. Wood has also been used on the floor, which gives it a luxury feel. In the pictures that have come out in its new video, there is no button of any kind in the interior. It is expected that its features can be operated with touch and sensor. In its rear row, the company has given bench and maximum legroom.

The upcoming electric SUV is powered by a 69 kWh battery that gives it a range of 590 km. Its battery is divided into two sections. Under one section the battery is placed in the floor while the other is used under the boat floor. The car is available in two variants, FWD (single electric motor on the front axle) and AWD (two electric motors, one on each axle). Power output is yet to be revealed. Its top speed is expected to be around 150 km/h.

What are the complete specifications of Tata Sierra EV which includes engine & transmission, fuel & performance and dimensions & capacity.

The Tata Sierra EV is expected to launch in January 2022